Social-Media Gaffes Make Some Chiefs Leery of Twitter, but a Few Brave Ones Embrace It

By LESLIE KWOH And MELISSA KORN

When General Electric Co. GE -0.22% Chief Executive Jeffrey Immelt tweeted for the first time this month, his “Hello Twitter” was greeted with some snarky replies, including this one: “@JeffImmelt how come my grandfather got on twitter before you?”

While arguably late to the game, Mr. Immelt’s debut on the microblogging site makes him a rarity among chief executives, who have generally steered clear of social media even as their companies have embraced it to commune with customers and pursue new business. 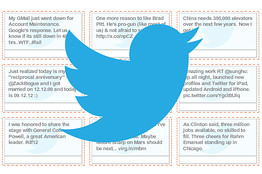 While many companies have taken to Twitter, their executives avoid it for fear of making public missteps. Still, some are attempting to navigate the world of social media with aplomb.

Chief executives are under pressure these days to appear accessible and “authentic,” but social media—with its demands for quick, unscripted updates that can quickly go viral—poses risks for top managers and the companies they represent, in the form of lawsuits, leaked trade secrets or angered customers.

Many corporate leaders say they are too busy running a company to spend time posting 140-character messages to Twitter, or retweeting posts from followers. What’s more, for some companies, the business case for using the site can seem unclear, with no direct correlation between Twitter followers and sales.

At least one leadership expert thinks those arguments are shortsighted. Most CEOs should accept that social media is part of their job description, says former MedtronicInc. MDT -0.92% CEO Bill George, a management professor at Harvard Business School and avid tweeter. “People want CEOs who are real. They want to know what you think,” he says, adding: “Can you think of a more cost-effective way of getting to your customers and employees?”

Ocean Spray Cranberries Inc. is pushing CEO Randy Papadellis to start tweeting. But when Mr. Papadellis said in a recent interview that one of his first tweets would mention drinking cranberry juice before eating sushi to prevent food poisoning, his director of communications, Cindy Taccini, quickly nixed the plan, noting that the claim hadn’t been clinically proven.

Seven in 10 Fortune 500 CEOs have no presence on major social media networks such as Twitter, Facebook, LinkedIn, Pinterest and Google+, according to a recent report by CEO.com and analytics company Domo.

Among those who do, 4% have known Twitter accounts and 8% use Facebook under their own names, according to the study, which was conducted in May. By contrast, 34% of all Americans are on Twitter and 50% use Facebook. 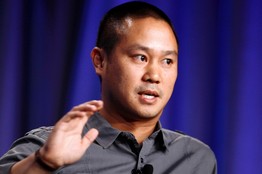 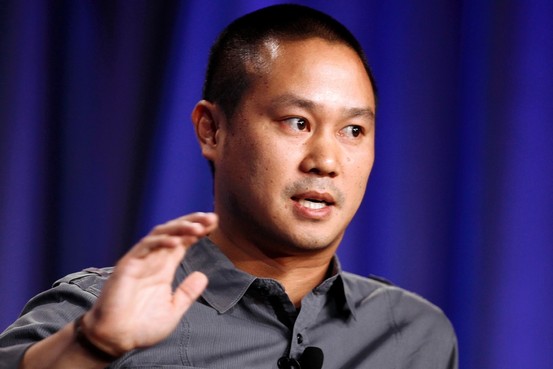 ReutersZappos CEO Tony Hsieh, an early adopter, hasn’t posted to his Twitter account for months. He says the network has lost its intimate, chatty feel.

Corporate leaders such as Yahoo Inc.’sYHOO -2.03% Marissa Mayer and Medtronic’s Omar Ishrak appear to have struck a balance on their Twitter accounts between personal and professional.

When she was tapped to head the struggling Internet company, Ms. Mayer, who is pregnant with her first child, rallied her troops and investors by posting photos of Yahoo-themed baby clothes onFacebook Inc FB -2.45% .’s Instagram photo-sharing site. More recently, on Twitter, she has talked up the company’s café.

But cautionary tales abound. In May, fashion retailer Francesca’s Holdings Corp.FRAN +0.33% fired its chief financial officer, Gene Morphis, after he took to Facebook and Twitter with posts about earnings calls, snide remarks about short sellers and self-congratulatory comments after the company completed a secondary share offering. Mr. Morphis continues to tweet as @theoldcfo. On Monday, he tweeted about meeting with venture capitalists.

Aetna Inc. AET -0.97% CEO Mark Bertolini started his account three years ago—though his daughter, a former social-media director, tried to dissuade him. He has used the platform to share personal news, such as his son’s kidney transplant in June.

Though Mr. Bertolini started tweeting to communicate with friends, he became a lightning rod for critics of the big insurer, one of whom tweeted a wish that he would die of a stroke, or that his family would perish in a car crash. But he also has used the platform to show a different side of the insurer.

Last summer, when a colon-cancer patient tweeted about hitting the cost ceiling on his Aetna health plan, hundreds of Twitter users directed angry posts at Mr. Bertolini, who then reached out to the patient, also via Twitter. The result: Aetna agreed to cover the man’s medical bills through the end of his latest plan year.

“I don’t want to be a press release,” says Mr. Bertolini, who has about 3,000 followers. “You have to take some chances. You have to put yourself out there.”

Fortune 500 CEOs who do have Twitter accounts have an average of 33,250 followers, according to the study by CEO.com and Domo. A business celebrity such as former GE chief Jack Welch has 1.3 million followers.

News Corp. NWSA -1.47% CEO Rupert Murdoch, who started tweeting in January, has amassed more than 326,000 followers. The media mogul has tweeted his opinions on issues such as gun control, public education and the euro crisis. News Corp. owns The Wall Street Journal. 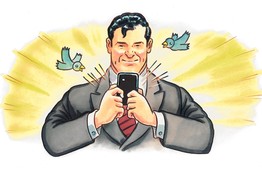 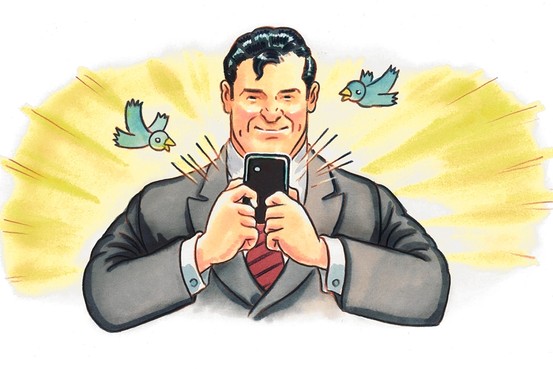 Not all CEOs are as outspoken. Michael Dubyak, CEO of Wright Express Corp.,AET -0.97% which provides fuel charge cards to government agencies and corporations, says he considered tweeting but concluded there were simply too many pitfalls. Close friends and family can find him on Facebook, where Mr. Dubyak has an account, though it isn’t listed under his full name.

Many executives who tweet get a helping hand, either in the form of edits from their public-relations staff or ghostwritten posts. GE’s Mr. Immelt, for instance, has a team that works to “execute his vision” on Twitter, helping him draft tweets, according to company spokeswoman. The tweets are the result of a “discussion” between Mr. Immelt and Deirdre Latour, GE’s senior director of communications, but “it’s his tone and vision,” she says. GE’s legal team doesn’t review the posts before they are published.

CEOs who do mind their own accounts have to steer clear of bashing competitors, disparaging customers or opining on polarizing topics like religion and politics. When she trains executives on social media, Amy Jo Martin, CEO and founder of social-media agency Digital Royalty Inc., says clients are “fearful of sharing too much versus not sharing enough.” She advises executives to give followers a glimpse, not a guided tour, of their lives.

Some executives are already over it. Zappos Inc. CEO Tony Hsieh, an early adopter, hasn’t posted to his Twitter account since June.

In an email, he said the network is good for making announcements, but has lost its intimate, chatty feel. He has moved on to sharing photos on Instagram instead.

Write to Melissa Korn at melissa.korn@wsj.com

View all posts by Rebecca Martin →

Ask to be endorsed by someone you don’t know. Help Them Help You!
Success and Failure – Treat These Two Imposters Just The Same.. Rudyard Kipling